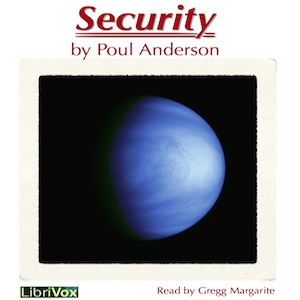 “Security”, tells the story of a compartmentalized government physicist ordered by secret police to complete experiments aimed at developing a new weapon. He is brought to a hidden space station and put in charge of the project but there are many questions. In a world of spies watching spies it’s sometimes hard to know what’s patriotic. -- Poul Anderson was a Golden Age Science Fiction and Fantasy author. “Security” first appeared in the magazine “Space Science Fiction” in February of 1953.
(Summary by Gregg Margarite)

Reviewer: Carly Corday - favoritefavoritefavoritefavoritefavorite - January 2, 2019
Subject: To Pyrodin
Yet the United States wants Julian Assange for "treason" and the guy isn't even an American. Dystopian enough? This is happening NOW. It strikes me as worse than any predictions I've EVER read in science fiction. No one even seems to notice that it's almost a joke, a non-American charged with treason against the United States. Of the people who are even aware of Assange and Wikileaks, half sympathize with him, the other half want him murdered by the State and say so right out loud as "journalists" on one insanely popular cable, ahem, "news" channel. Who wants to be next after Assange????

Reader is always excellent. Thanks Gregg!

Reviewer: Pyrodin123321 - favoritefavoritefavoritefavoritefavorite - August 2, 2010
Subject: Eerily Predictive for 1953!
I liked this somewhat dystopic short story, but it kinda creeps me out when books written in 1953 predict that the first amendment will be subverted, habeas corpus and all rights forfeitted, and torture permitted if you are even suspected of "treason". It also predicts some very near real technology, super capacitors!
This work of fiction is frighteningly close to the reality, only instead of "treason" its "terrorism" and the situation is getting worse.

"Those who would give up Essential Liberty to purchase a little Temporary Safety, deserve neither Liberty nor Safety." -Benjamin Franklin


By the way-Gregg Margarite and Mark Nelson both occupy the #1 reader position in my book!

Uploaded by librivoxbooks on December 5, 2009